Like Earth, planet Mars has polar ice caps and clouds in its atmosphere, seasonal weather patterns, volcanoes, canyons and other recognizable features. However, conditions on Mars are very different from those on our home planet. Mars is the fourth planet from the Sun. Its orbit lies between Earth’s orbit and the asteroid belt. On Mars, the land and sky have a red or pink hue.

The first maps of Mars were produced by Germans Johann Heinrich von Madler and Wilhelm Beer in 1830, based on telescope observations at Beer’s private observatory. Madler and Beer used a 95 mm telescope with limited resolution. Their maps delineated dark and light areas rather than sharp features. A more detailed map of Mars was published by Italian astronomer Giovanni Schiaparelli in 1877. Schiaparelli’s map was more complete but also lacked sharply-defined features and included illusory channels. The darker areas visible using 19th century telescopes were assumed at the time by many astronomers to indicate seas and shoals and the lighter areas land. Accordingly, they used terms such as mare (sea) in naming darker visible geographic features and terra (land) in naming lighter areas. 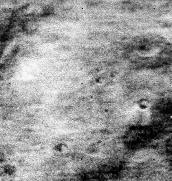 On July 15, 1965, 228 days after being launched from Cape Canaveral, the NASA probe Mariner 4 transmitted 22 television pictures of Mars as it flew by the planet at an altitude of 6,118 miles. The pictures revealed a surface containing many craters and naturally occurring channels but no evidence of surface water. Since then, several probes have orbited and landed on Mars. These vehicles, robotic and remote-controlled, have provided a wealth of information.

From 1997 to 2006, the NASA Mars Global Surveyor spacecraft carried out observations that served to produce detailed maps of the surface of Mars. Beginning in 2004, two NASA robotic rovers, Spirit and Opportunity, have explored the Martian surface and geology. The six-wheeled solar-powered rovers are 5.2 feet long and weigh 408 lbs. They are equipped with a robotic arm, a rock abrasion tool, cameras, and spectrometers. Opportunity landed in the Terra Meridiani, Spirit in the Gusev crater.

Data obtained by the European Space Agency (ESA) Mars Express Orbiter indicate the presence of sedimentary deposits suggesting the presence of a water ocean on Mars 3 or 4 billion years ago. Various other observations indicate the current presence of subsurface water ice in several areas of Mars. Observations conducted by the NASA Mars Reconnaisance Orbiter show the formation of gullies is ongoing on Mars. These gullies indicate flows involving carbon dioxide (dry ice) and possibly liquid water. Current atmospheric pressure and temperature conditions would not allow the long-term existence of liquid water on the surface of Mars, but melting ice water could produce temporary liquid water flows.

Mars has a weak magnetic field, apparently due to strong crustal magnetic fields rather than from a dynamo of moving molten metal at the core. Remote sensor data indicate that Mars lost its central dynamo long ago. Mars has two small, irregularly shaped satellites, Phobos and Deimos. The satellites were discovered by Asaph Hall in 1877 using the 26-inch refracting telescope at the U.S. Naval Observatory. Phobos orbits at a distance of 5,828 miles from the center of Mars. Deimos orbits Mars at a distance of 14,577 miles. The mean diameters of Phobos and Deimos are 13.9 miles and 7.7 miles, respectively.

Beneath its hazy, pink sky, Mars is rocky, cold, and sterile. Today’s Martian wasteland hints at a past more active world where volcanoes once raged, meteors plowed deep craters, and flash floods rushed over the land. The northern hemisphere is characterized by vast plains. The southern hemisphere has many craters.

Altitudes on Mars are defined by convention with respect to a reference datum that corresponds to the altitude at which atmospheric pressure is 6.105 mbar (0.180281 in.Hg) at a temperature of 273.16° K (32° F). This pressure and temperature define the triple point of water, that is, the point at which the three phases of water (vapor, liquid and ice) coexist in thermodynamic equilibrium. Latitude on Mars is defined with respect to the equator, an imaginary line on the surface approximately equidistant from the poles. The equatorial line lies on the plane perpendicular to the planet’s axis of rotation which contains the center of mass. Longitude is defined with respect to the Prime Meridian, which on Mars by convention passes through the crater Airy-0 in the Sinus Meridiani (Terra Meridiani).

In 2014 NASA announced that the Tunable Laser Spectrometer of the Curiosity rover detected atmospheric methane (CH4) at concentrations of 5 to 9 ppbv (parts per billion by volume) during a period of 70 Martian days of operations in the Gale crater. NASA also announced that Curiosity mass spectrometers detected the presence of organic molecules (made primarily of carbon, hydrogen and oxygen atoms) in drilled mudstone samples.

Carbon dioxide and a small portion of water vapor freeze out of the atmosphere to form a polar cap, alternately at each pole. The cover of snow evaporates with the coming of spring in each hemisphere. The atmospheric pressure on the surface of Mars varies from 0.201 to 0.319 in.Hg, which compares with an average atmospheric pressure of 29.92 in.Hg on Earth at sea level, and 8.86 in.Hg at the summit of mount Everest.