The Earth's surface temperature varies among localities across the globe. It is warmest along the equator and coldest on the poles. Mountainous areas and high plateaus are colder than regions closer to sea level. Within a year's time, temperatures change seasonally, with each hemisphere showing opposite trends, that is, when the northern hemisphere is colder, the southern hemisphere is warmer. The average Earth surface temperature, currently 59 deg F, also changes over long periods of time.

Conditions In The Early Earth

Early in Earth's existence, its topography and temperature were quite different than today. When Earth first formed, about 4,600 million (4.6 billion) years ago, as a mass of rocks in the newly formed solar system, the planet was uninviting and lifeless. Earth's geography, atmosphere and surface temperature have been changing ever since. During its early existence, Earth was subjected to frequent collisions with large objects. The moon may be the result of such a collision, between Earth and a large planetoid.

Within 200 million years of its formation, Earth was transformed into something closer to today's appearance, with a molten core, a mantle and crust, surface water, and a gaseous atmosphere. The early atmosphere was mainly made up of nitrogen, carbon dioxide, and hydrogen. The Earth did not look as it does today. Land masses were not arranged in the continents that now exist and oceans were not located as they are now. The minerals in the crust were not what they are today. Surface temperatures were perhaps as high as 200 deg F.

The planet's crust is divided into several tectonic plates that migrate across the surface over periods of time of many millions of years. Throughout Earth's history, the continents have broken up and reassembled many times in different ways and the oceans have shifted positions as well. Since estimation of the most ancient temperatures is usually based on studies of rock formations, continental drift must be taken into account in determining the location on the globe of a particular rock formation at a specific point in the distant past.

The configuration of Earth's land masses and oceans has significant effects on planetary climate. Weather conditions (specifically temperature) are affected by worldwide atmospheric and ocean circulation patterns and by the hydrologic cycle (water evaporation, precipitation, and river flows to sea).

Emergence of Life on Earth

Primitive forms of life first appeared in the oceans about 4 billion years ago. By about 3,500 million years ago life had evolved to the point where single-cell organisms capable of photosynthesis, like blue-green algae, thrived in the oceans. Photosynthesis is a process that, in the presence of light and the substance chlorophyll, converts carbon dioxide and water to sugar and oxygen. Energy from sunlight is stored chemically in the bonds of sugar molecules.

Prior to 2,100 million years ago, Earth's atmosphere contained only small amounts of oxygen. Although photosynthesis began generating large quantities of oxygen as far back as 3,500 million years ago, for a very long time there was no appreciable buildup of oxygen in the atmosphere. Since oxygen is highly active chemically, it first reacted with gaseous and solid compounds on Earth: carbon monoxide, methane, hydrogen, sulfides, iron, etc. Over many millions of years, the oxygen generated by photosynthesis altered the makeup of the planet's crust and mantle. The Earth's crust became mostly oxides (silica, alumina, lime, magnesia, iron oxide, etc.).

By 2,100 million years ago, the chemical interactions between oxygen and surface and subsurface materials, and oxygen and gases in the atmosphere, had mostly exhausted the available reactive substances. The atmosphere was mostly nitrogen, carbon dioxide, methane, and hydrogen. It was then that the oxygen byproduct of photosynthesis began to rapidly accumulate in the atmosphere, soon exceeding 10 per cent. Amounts of atmospheric methane and hydrogen were greatly reduced.

There was a period of global warming beginning about 2,100 million years ago. The glaciation receded and eventually practically disappeared. The polar regions were cold, but not covered by ice. Only high-altitude glaciers remained. Earth became warm for more than a billion years. The average global temperature was about 71 deg F, significantly warmer than today's 59 deg F.

About 1,800 million years ago, continental drift had assembled the Earth's land masses into a supercontinent, Columbia. The land surface was barren, a lifeless rocky desert.

The shape of the continents and the way they were arranged was very different than today. South America and Northwest Africa were together in the north. North America and Asia were near the equator. India, Australia, Siberia, Greenland, and Europe were in the southern hemisphere.

The Mesoproterozoic era (1,600 million to 1,000 million years ago), saw the evolution of sexual reproduction and of primitive multicellular organisms in the oceans. 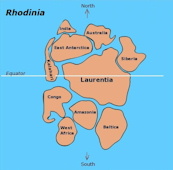 About one billion years ago, the world's land masses drifted together again to form the supercontinent Rhodinia. India, Australia and Siberia were to the north, and a large land mass, Laurentia, straddled the equator. Africa, Amazonia and Baltica were in the southern hemisphere.

Rhodinia began to break up about 750 million years ago. A new period of global cooling began at about that time.

A global warming period followed the end of the Sturtian/Marinoan glaciations. During the Cambrian, average global temperatures rose to about 70 deg F. Atmospheric Oxygen levels were then about 13 per cent. This warm period lasted 175 million years. The Cambrian Period, beginning 542 million years ago, saw the expansion of marine invertebrates. Jawed fishes appeared about 416 million years ago, at the beginning of the Devonian Period.

There have been four glacial ages during the past 500 million years. An ice age took place about 460-425 million years ago, during the late Ordovician and Silurian Periods. At times during this period, average global temperatures dipped below 53 deg F.

During the Carboniferous Period, 360-300 million years ago, atmospheric oxygen levels reached 35 per cent. The abundance of oxygen led to the evolution of very large insect species. Foot-long insects crept on the land and flew in the air. 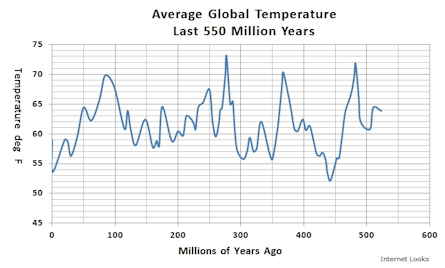 The next glacial age occurred in the period between around 324 and 265 million years ago, during the late Carboniferous and Permian Periods. The different continents drifted together and joined to form Pangaea about 225 million years ago.

The significant changes in Earth's topography may have influenced the climate to rapidly chill, leading to glaciation. This relatively mild glaciation lasted from 170 to 110 million years ago, during the late Jurassic and early Cretaceous Periods. Average global temperatures dipped to about 58 deg F.

A warm period began about 110 million years ago, during the Cretaceous. Dinosaur fossils have been found at a distance less than 10 deg latitude from where the South Pole was at the time. The warm period, with average global temperatures reaching about 68 deg F, saw an expansion of mammals and lasted until 55 million years ago, when a global cooling period began during the Paleogene Period.

Only during a small part of the Earth's history has there been a glacial age. Temperatures vary significantly during a glacial age. There are colder periods when the glaciers advance (glacial periods) and warmer periods (interglacials) when they recede. Sea levels drop during glacial periods, when more water is held in the ice sheets and glaciers, and rise during periods of higher global temperatures, when more ice melts.

Continental drift and its effect on ocean currents may play a role in driving the onset and termination of glacial ages, but no single driving factor has been confirmed. Among other possible causes of glaciations are levels of carbon dioxide and oxygen in the atmosphere, changes in solar activity, and variations in Earth's orbital characteristics.

The last glacial episode began 2.58 million years ago, at the start of the Quaternary Period. The Quaternary covers the time interval in which humans have inhabited the Earth. Atmospheric oxygen levels have remained steady at about 21 per cent during this period. The current glacial episode is a latter-day manifestation of the glacial age that began during the Paleogene Period. For thousands of years, glaciers and ice sheets covered most of North America and Europe, as well as Antarctica. Since then there have been many glaciations and interglacial periods. Temperature change estimates for the last 800,000 years show a succession of global warming and cooling cycles. During this period, the time between the onset of glaciations varied from 30 to 120 thousand years.

The last major glaciation lasted from 110,000 years ago to 10,000 years ago, when the current interglacial period began. All that remains of the continental ice sheets are the Antarctic and Greenland ice sheets, and some smaller glaciers such as the Hubbard and Vatnajokull glaciers. Average global temperatures during the period from 130 thousand years ago to the present varied from 8 deg F higher to 18 deg F lower than current average temperatures. Mean sea levels were about the same as current levels 120,000 years ago, but dropped to about 300 feet lower than at present during the coldest part of the glacial period, 20,000 years ago. 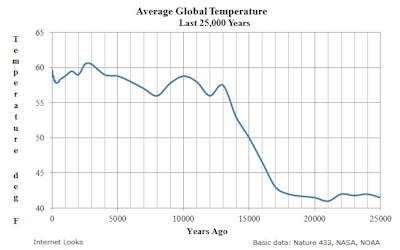 In the 1980's and more recently, some scientists theorized that emissions from burning fossil fuels (coal, oil, gas) contribute to a global increase in atmospheric carbon dioxide, and that this increase in carbon dioxide would result in a significant rise in global temperatures.

It was also conjectured that the release of chlorofluorocarbons into the atmosphere would significantly reduce the ozone layer of the stratosphere, and since the ozone layer protects the growth of ocean phytoplankton, potentially contribute to a greenhouse effect and a rise in global temperatures. Out of concern that human activities could in some way influence the climate worldwide, the United States placed restrictions on the use of chlorofluorocarbons in air conditioners. Various nations have placed restrictions on fossil fuel emissions.

Some published data supporting the impression that burning fossil fuels has already resulted in a small increase in global average temperatures was later determined to be falsified. Temperature estimates (from ice cores and other sources) going back 25,000 years show that present average global temperatures remain within the trend begun at the start of the Holocene interglacial 10,000 years ago.

Some concerns persist over fossil fuel use and the substitution of crop lands for forests eventually affecting the world's climate, but the latest available global temperature measurements, including direct on-land measurements, sea buoy telemetry, and satellite remote sensor data do not show an appreciable warming trend. Changes in average global temperatures during the last thousand years are minute (plus or minus 1 deg F) when compared to longer-term changes experienced in the past. The most current information indicates a flat global temperature trend in the 1997-2014 period. Continued monitoring of worldwide climate conditions will be useful in determining future trends.

There are three main possibilities regarding the planet's future temperatures, over the next several thousand years. One is a continuation of the present interglacial, with world average temperatures following the trend of the last 10,000 years and polar ice caps and sea levels remaining more or less as at present. Another is a termination of the current glaciation, with average global temperatures rising five to ten deg F, polar ice caps markedly receding, and sea levels rising a hundred feet or more. A third scenario would entail a termination of the interglacial and a return to a glaciation similar to that prevalent before the Holocene, with ice sheets covering the current temperate regions, significantly lower sea levels, and average global temperatures dropping ten deg F or more. It would take centuries for the last two scenarios to fully develop, time enough for redeploying the world's population and preparing for a changed environment.