God created the heaven and the earth, day and night, the firmament, the plants and the animals.

From Genesis 1:26:
And the Lord said, "Let us make man in our image, after our likeness."

From Genesis 2:7:
And the Lord formed man from the dust of the ground and breathed into his nostrils the breath of life, and man became a living being.

From Genesis 2:15:
The Lord took Adam and put him in the Garden of Eden to work it and take care of it. 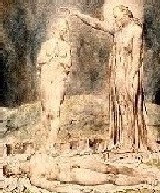 Eve was the wife of Adam, the mother of Cain, Abel, and Seth.

God determined to create a companion for man, that he should not be lonely.

From Genesis 2:22-23:
And the Lord caused a deep sleep to fall upon Adam, and he slept. And the Lord took one of man's ribs and closed up the flesh thereof. And the rib which the Lord had taken from man, made he a woman and brought her onto the man. And Adam said, "This is now bone of my bones and flesh of my flesh; she shall be called Woman because she was taken out of man."